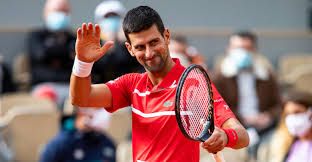 Novak Djokovic has come very close to touching the all-time best record of being at the top of the world rankings for the longest time since childhood idol Pete Sampras. Djokovic will be able to touch the record of holding the top six seasons of the American tennis star Sampras if he wins two matches of the Vienna ATP tournament this week.

“Sampras is my childhood idol whose game I grew up watching,” Djokovic told a news conference on Sunday. The feeling of being able to touch the record of finishing the season from the top like six times is really different. ‘
In addition to this record, Djokovic wants to touch Federer’s all-time record of being at the top of the rankings for 310 consecutive weeks. And to do that, it has to hold its top position till March 2021. Although Djokovic admits that in the current situation, everything is in uncertainty. “It’s the biggest goal in front of me right now,” Djokovic said. And I’m working on this. I hope I can achieve that goal in March. Although in the current situation everything has changed. The situation is changing every week.

This is Djokovic’s first appearance in Vienna since winning the title in 2006. This is the Serbian star’s first tournament since losing in a straight set to Nadal in the final of Rola Gamro two weeks ago. Current champion and host star Dominic Thiem could be his potential opponent in the final to win his fifth title in 2020. Six of the top 10 players in the world are taking part in the tournament, which starts in the Austrian capital. Djokovic and Theme are among them.